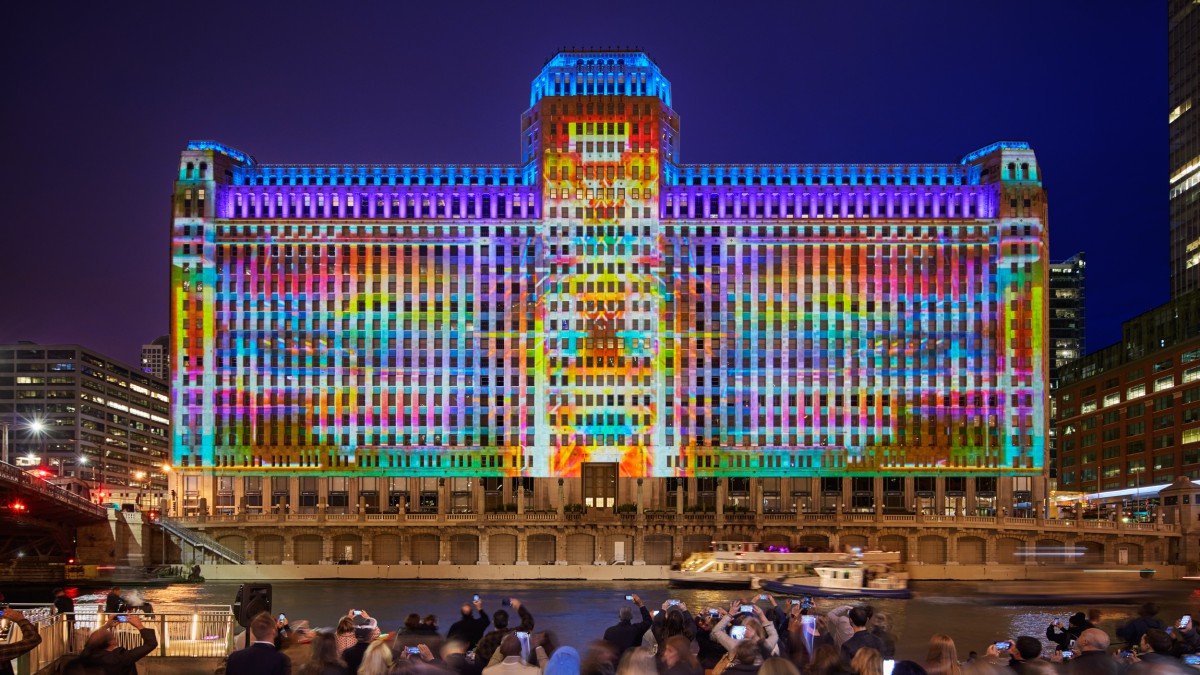 The AV industry has always taken projection mapping seriously. But the public? Perhaps not. It’s hard to name a building of importance or national monument that’s not been considered improvable with a laser scan and a generous dousing of lumens – but projection mapping is still too often seen as something to gawp at rather than engage with.

There is no branding, or corporate logos or advertising when the river frontage of ‘The Mart’ becomes a massive, two-and-a-half-acre canvas. No attempt to smuggle in promotional messages is allowed. This is a work of serious art, not commerce.

In an unprecedented thirty-year agreement with Vornado Realty Trust, theMART and the City of Chicago run it – and local artists, curators and cultural officials at Art on theMART curate it. It delivers two-hour projections on a vast publicly accessible space, five nights a week, ten months a year, for decades.

And the scale of the projection masterminded by Obscura – using thirty-four 4K30 Christie Boxer projectors mounted across the river to generate in excess of one million lumens – shows this is a serious project with serious artistic ambition.

Speaking to the Chicago Tribune, Cynthia Noble, the Chicago curator and executive director of the project said they wouldn’t even “Yield to the temptation to, say, invite the city to watch a showing of The Blues Brothers. I don’t think this is meant to be thought of as a movie screen, we believe this is going to be worthy to be considered for art criticism but also be very accessible.”

But it’s the sheer projection mapped permanence of the thing that makes a difference. It may be a novelty now, but Christie’s firm hope is the artistic messages it delivers will soon outshine the projection mapping medium that delivers them. And while that may sound like a curious thing for a projector manufacturing company to hope for, we think it’s a sign of maturity.

If every new creative technology goes through a period of adolescence, experimenting to find its artistic feet, it seems that projection mapping has found its. Cinema was a novelty act when it first started, so were the talkies, stage lighting was once viewed with suspicion – but look what they’ve grown into.

Projection mapping is coming of age at places like theMART and with the help of companies like Obscura. We may not know how it will evolve, that’s in the nature of art, but what projection mapping can offer, and which almost no other creative endeavour can, is large scale experiences everyone can share. Who’s to say that digital artists, with access to canvasses as public and as prominent as this won’t one day become as well-known as Tarantino or Spike Lee.

Even though experts like Ryan McDonnell, Obscura’s on-site system engineer talk of nonchalantly of ’tossing light around’ in truth he, and others like him, are in at the birth of something big.

And in the case of theMART, something very big indeed.