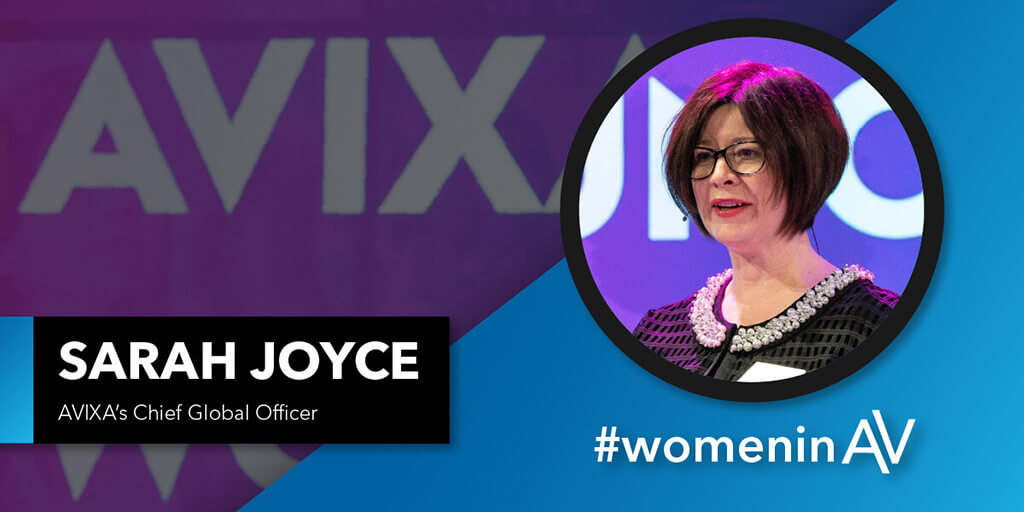 Just now though, this is unfinished business.

Thankfully, one of the many people working hard to make sure it isn’t on our collective conscience for a moment longer than it need be is Sarah Joyce, AVIXA’s Chief Global Officer. And she says three arms of AVIXA, The Foundation, The Diversity Council and The Women’s Council are fundamental to its resolution. The Foundation because its work giving a new generation access to skills, education and career paths must be available to all, or not be successful at all. The Diversity Council because it allows professionals from diverse backgrounds and cultures to openly discuss and drive inclusion initiatives and the Women’s Council because it both gives a voice to women in the Industry and because it’s a reservoir of experienced guides who can successfully mentor that diverse generation once it does join.

Again and again, when we speak, Sarah returns to how mentoring simultaneously improves diversity and the desirability of AV as a career – and how having someone you trust and admire to turn to is worth any number of warm words. Mentors, she says, are unsung heroes who make finding your place in AV, “More of a conversation and less of battle than it once was, especially now that there are more women in senior leadership positions and managerial positions.” At the same time, she’s at pains to point out that a mentor doesn’t need to share the same gender, or indeed any other characteristic, to be either effective or accepted, and that there’s little point in replacing one closed silo of opportunity with lots of little new ones.

“The AVIXA women’s council is about inclusivity. It’s not A Woman’s Group. There are many men – thankfully and brilliantly – who are part of the many councils around the world and that inclusive attitude has helped The Women’s Council become probably the fastest growing for AVIXA. There are now, I think, 45 councils around the world and they have about eight hundred and forty-five members. These are real and important business assets where the groundswell is about networking, training opportunities, and career development generally. There’s this ‘pay-it-forward’ attitude as well; the more mentors there are, the more successful examples there are to admire, then the more a support community will grow and the fewer the difficulties will be.”

The aim is to render genuine inclusion as a default rather than an exception – and there’s certainly a wide appetite for that in AV. At ISE this year, one hundred people attended AVIXA’s first Diversity Council Event – with June Sarpong OBE, Director of Creative Diversity at the BBC as the keynote speaker. That attendance shows a growing belief that inclusion isn’t warm words on a website, but a fundamental strength of a healthy industry. AVIXA’s Diversity Council now has over 260 members busily promoting human, cultural, and systemic diversity in all its forms through networking, educational, and leadership development. And promoting general all-round awareness that partial inclusion is, by definition, no kind of inclusion at all.

A goal within grasp

These are changes that the Industry both wants and needs to make. And if we don’t make them, there’s a danger an incoming generation of talent will doubt our claims to be a switched-on, tech-savvy, welcoming industry – and might well look elsewhere.

What is remarkable, though, is that AV’s inclusive goal is now within grasp. It’s no longer some ideal that might be achieved in some undefined future – but the very definition of it.