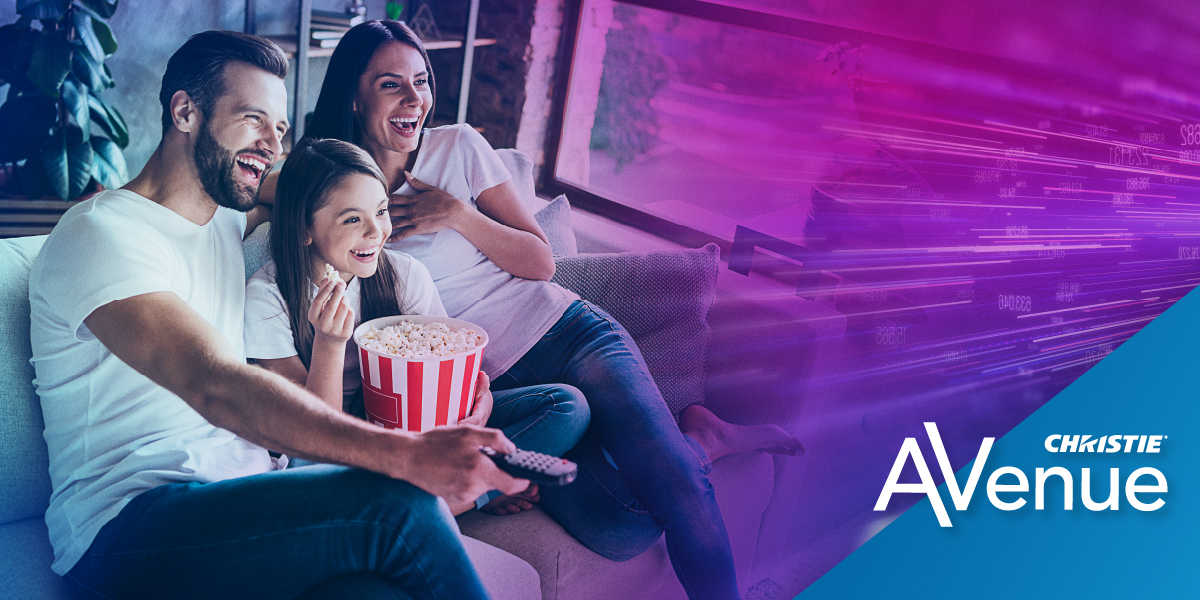 Streaming is the bad guy. Streaming will mean the end of cinema; theatres will stand empty and, in the end-days of on-demand, only sofas will be occupied. That’s how the orthodox, pessimistic, view says things will be – and it’s a shared worry for exhibitors the world over. But what if it could provide a new revenue stream for exhibitors? Because it could.

From your cinema to their home

Christie’s new virtual streaming technology takes the whole idea and looks at it from an exhibitor perspective. What if exhibitors could stream content directly into their customers’ homes, and do it during the release window when no one else can? Why wouldn’t exhibitors do that? Why wouldn’t they unlock this revenue stream and reap its rewards?

Well, the barriers are no longer technical ones. Christie’s new streaming technology allows exhibitors to do just that: securely, profitably, and with cinema-quality content. It means there is now no reason why a customer shouldn’t buy a ticket for a screening and watch it from an exhibitor’s media block in the comfort of their own home.  The only change is their location.

The economics are the same, and so is the studio’s split of the revenue. All exhibitors would be doing is further monetizing the content they already have the rights to show – but in a novel, virtual way.

If you truly believe, as the industry generally does, that the full cinematic experience is only found inside movie theatres, streaming won’t change that, and nor will movie-going habits. The long-awaited blockbuster will still start an itch among movie-goers that can only be scratched with a big-screen, big-sound, high-res experience. But if there’s something customers want to see during the exhibition window, but are unsure, or can’t make it to the theatre, or can’t find company to go with, or if there’s a blizzard or pandemic, they still can.

Christie’s streaming technology will help ensure tickets are sold – where previously, they were not.

And even more tickets may get sold to markets that aren’t traditionally served first-run cinema content, such as schools, nursing or retirement homes, senior centers, and hospitals.

What’s more, the data behind the transactions of who bought what, why and when, remains firmly in exhibitors’ hands and in their CRM software. The exhibitor’s role as a curator of content and setter of schedules is, if anything, enhanced.

But what about the popcorn?

What about those vital concession revenues? Well, these are early days, and just how exhibitors deploy this technology depends, wholly, on their needs. But pizza (and much else) via an app is hardly a novelty these days – maybe there’s a slice of that business ready and waiting too…Or partnerships with newly hungry food retailers, perhaps themed menus to match the feature might become a thing.

As we said, these are early days, and this technology is new. Exactly how it’s used and how it develops will ultimately be decided by the people who understand the business of settling audiences in seats – wherever those seats may be – better than anyone else. And that, undoubtedly, is exhibitors.