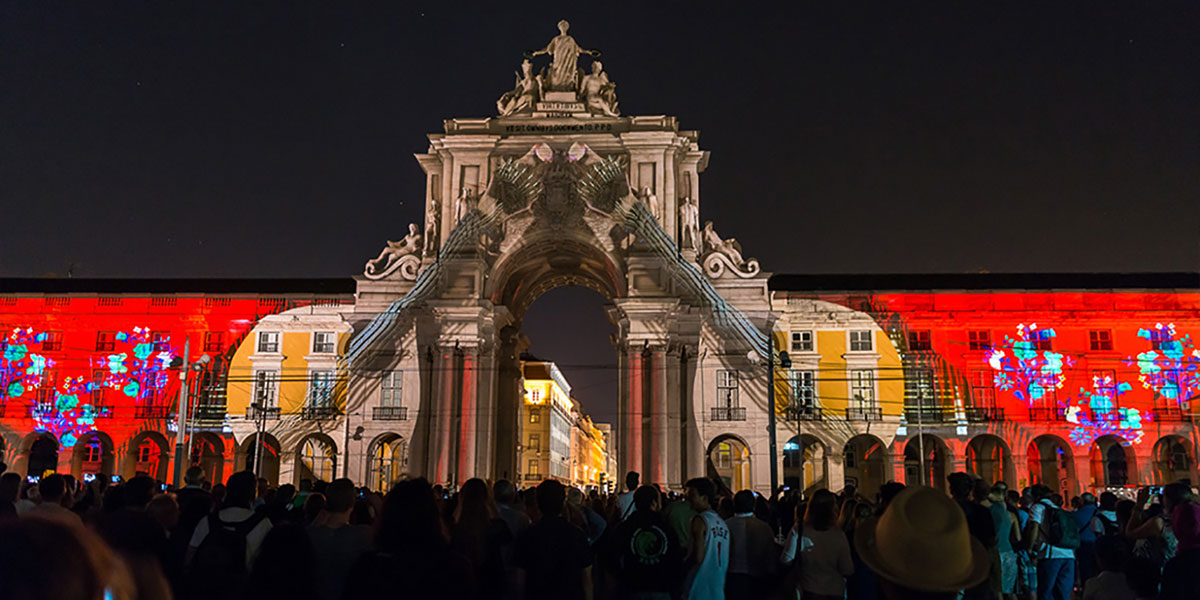 All cities have a centre of gravity. The Brandenburg Gate, Trafalgar Square, Champs-Élysées, Red Square. But the Praça do Comércio, Lisbon’s main square is different. It is just as central, just as important, but it has wider horizons. It does not look inward, but outward to the sea.

The discoveries that lay beyond

That’s why throughout history one side of the Praça do Comércio has remained open foreshore, a route to the sea and a reminder that Lisbon’s historical interests lay westward to the Atlantic and the discoveries that lay beyond. No wonder then, when Lisbon’s City Council and Tourist Board asked events agency Bridge to create an historical multimedia spectacle, the Praça do Comércio was Lisbon’s perfect venue.

As with all events on this scale, an impressive location hid some equally impressive technical challenges: the 132 metre long, 40 metre high facade – every finely detailed millimetre of it – had to be transformed into a seamless projection-mapped tapestry. And that would take careful planning, precise measurement, and some of the world’s most powerful projectors.

So Bridge enlisted Europalco to coordinate the technicals. First they generated the precise measurements that the three-dimensional animations created by Grandpa’s Lab would require if every last architectural frieze and filigree were to be matched. Then they designed a set-up using twelve, 3DLP®, 20,000 lumen, HD Roadster HD20K-J’s arranged in three banks of four. Three towers were constructed, each one forty metres from the façade and – with each projector throwing a 13.5 x 24 metre image – that gave a final resolution of 10,500 x 3200 and 240,000 lumens of power.

Each projector bank in each tower was controlled by its own Pandoras Box. Winners of many prestigious awards and famed for their technical agility, they’re perfect for large scale; high-impact multimedia shows such as these.

As night fell, and with the quiet waves lapping unseen in the dark, the entertainment began. Long-forgotten historical characters came alive to tell Lisbon’s unique story in Lisbon’s unique square. There were master craftsmen, knife grinders, and, of course Lisbon’s fishermen and merchants, all showing that – perhaps even more than Venice – this is a city wedded to and inseparable from the sea.

João Morais, from Bridge, “The quality of the mapping projection was absolutely superb and the technical aspect of the show was seamless. Having twelve identical projectors made all the difference and gave a level of brightness that gave the mapping a major impact. The combination of hardware and software was flawless too, thanks to Pandoras Box managing the technical integration.”

Ideas have centres of gravity too

We often praise technology for the tools it gives creative experimenters like Bridge, Europalco and Grandpa’s Lab. But technology gives artists more than fixed rules. Great creative ideas have centres of gravity in the same way cities do, but both need freedom. That’s why Christie, as technologists, are careful not to box you in, but to leave you your own route to the sea – so you’re free to explore an ocean of new and undiscovered ideas – and whatever lays beyond.