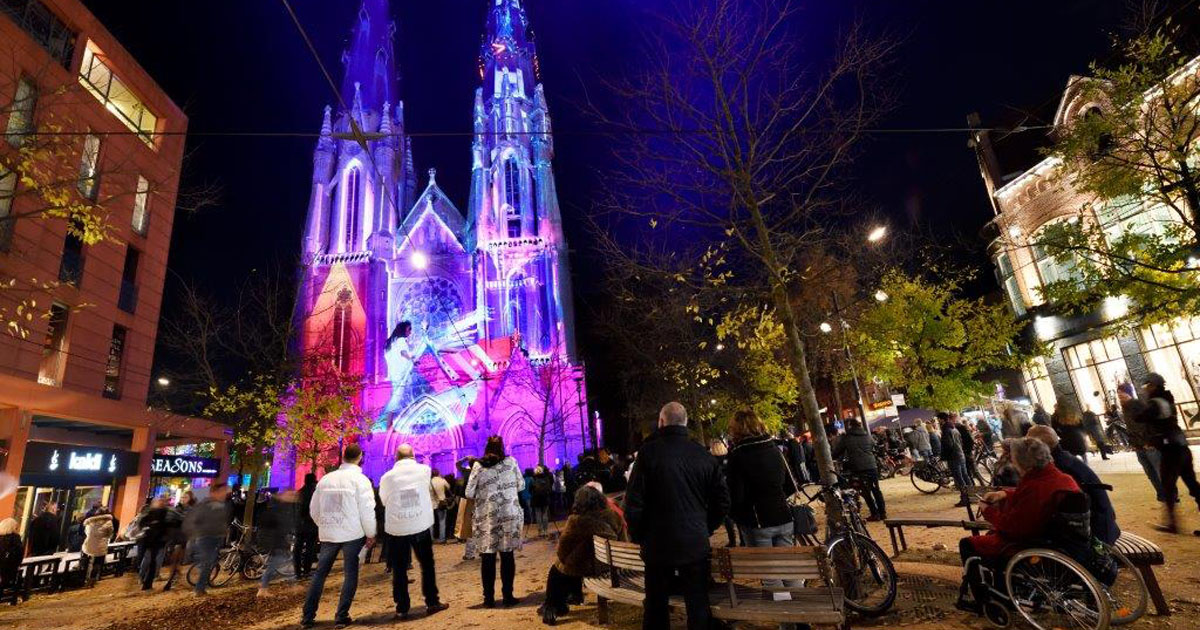 Whisper it on street corners, shout it from church steeples, this year’s Eindhoven Glow has been the most successful ever. And the reason for that? In part it has to be to its sheer variety – installations that spoke softly alongside spectacular lightshows that announced projection mapping’s prowess from the rooftops.

It’s that mix between the subtle and the spectacular, the pianissimo and the forte, that mark out all successful art shows – and it was how, for eight days in November, GLOW turned Eindhoven’s city centre into a place that was by turn electrifying and ever-so intimate.

Opposite ends of the spectrum

At opposite ends of the spectrum were two installations, both masterminded by Sahara Benelux. At the oh-so-subtle end was Glowie, an interactive booth with barely enough room for four people, but which packed and emotional punch all the same. Glowie just wanted to get to know you, to find out what made you tick – and make you the happiest person you could be. True, Glowie was sufficiently self-aware to know that, as a voice-commanded, state-of-the-art chatbot it was living in a world created by 10 Christie UHD 551-L LCD panels and Greenhouse Group – but that didn’t stop it trying, or queues forming. Or for its prognostications to seem eerily accurate.

Meanwhile, soul food of a different kind was being served on a much grander scale at Confluence at the nearby Catharinakerk – a neo-Gothic building by Pierre Cuypers. Here, virtual figures of light danced across Victorian stained glass and filigree architecture in a projection mapping show created by Ocubo and inspired by the confluences of The Netherlands’ many rivers and streams. The effect was emotionally inspiring, but its creation was complicated by the church’s dark traditional brickwork.  Twelve Christie D20WU-HS – the lightest and brightest 1DLP® laser phosphor projectors available – were needed to project onto its complex and unforgiving surface.

Indeed, projection onto European ecclesiastical architecture has become a bit of a Christie specialism of late. When one of the oldest cathedrals in Europe, Aachen Cathedral (Der Dom) celebrated its first 40 years as a UNESCO World Heritage Site earlier the same month it was 14 Christie Boxer 4K30 projectors that did the honours, this time supplied and rigged by Publitec. Der Dom survived (just) both the Fire of Aachen in 1656 and Allied bombing in World War II, it was founded by Charlemagne in the eighth century and is the site of his tomb – so has a important story to tell – as 40,000 rapt spectators over nine evenings discovered.

What was impressive about these projects is that each spoke to an artistic, very human, need to understand our place and history in the world. Yes, they may be spectacular or irreverent on occasion – but they all recognise that it is not enough to overawe an audience with technology or amuse with visual tricks – to succeed you have to connect with audiences, soul to soul

Which makes us wonder – with all these ancient cathedral shows and chat-bot confessionals – is our industry discovering a spiritual side?