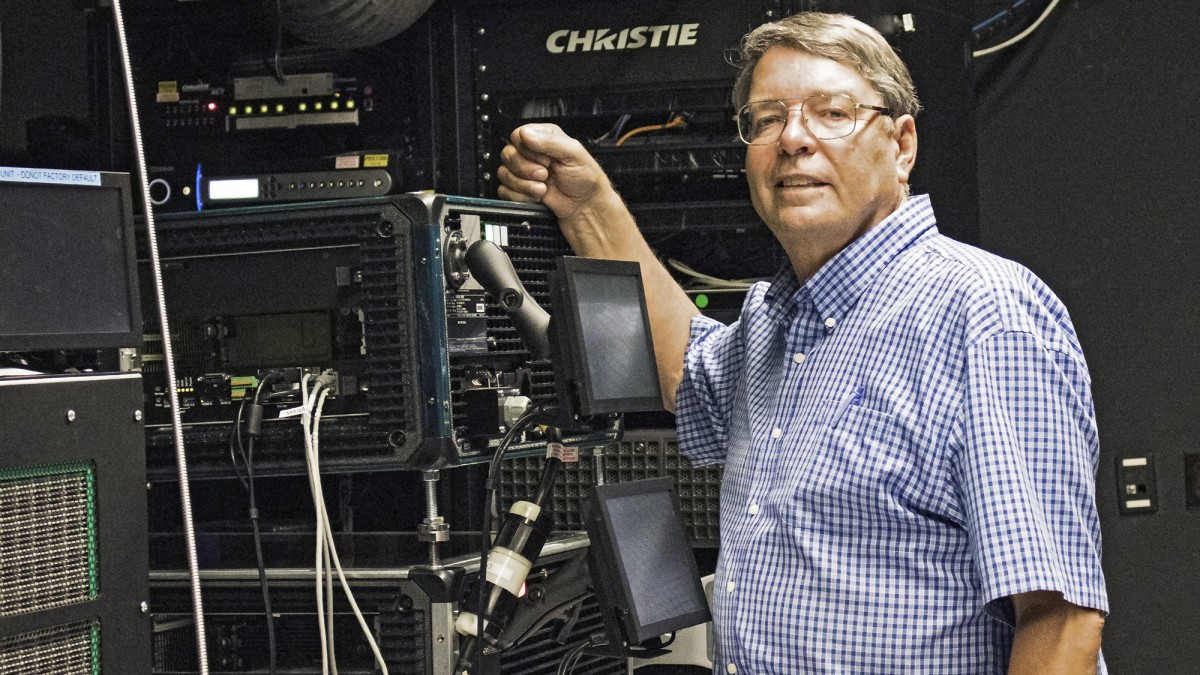 Talk to Terry Schmidt, Christie’s long-serving Chief Scientist, and he does what all outstanding innovators do and claims he’s ‘just an engineer solving problems.’ You then type his name into Google, look at the numerous patents he has to his name, and realize why he’s affectionately called Christie’s grandfather of digital projection.

For it’s hard to find anyone who has done more to turn digital projection into the reliable, almost universal, projection technology we know today. And it all came about because he says he wanted nothing more than to make anything he was working on work better than anyone had ever had it work.

Take the snappily titled Patent US9,462,241B2. Filed with Simon Guthrie, this patent describes a way of linking the rapid on/off abilities of a DLP® chip with the speed with which solid-state light sources such as LED and laser can increase or decrease output. Terry saw that if you could get the two working harmoniously together – by predicting the light the DLP® is going to need for a particular image in advance, and ensure the light source delivered just that and not a lumen more – two things would happen. For a start, you’d need less illumination power to achieve the same image brightness because the DLP® receives precisely the light it needs – and no more – frame by frame. That means the lifetime of the light source increases, operating costs drop and cheaper light sources become viable. Once he had useful control of that illumination source at source (it was no longer either blindingly bright or not on at all) – all kinds of other Terry cleverness was possible. Better black level performance and wider dynamic ranges and highly efficient color control – advances we now take for granted in Christie products, but which simply wouldn’t exist in their current form without the pioneering work of Terry and his colleagues.

Now, that example may sound a little rarefied, but Terry goes out of his way to explain that his and Christie’s preference is always for practical people to search for practical, commercial solutions. “I’ve never much liked the idea of plan, plan, plan, plan, plan execute,” he says, “because rarely do you execute the first time properly. I like to plan a little – not much – build something, see where its problems are, then plan more and build again.” It seems that the business of getting things to work better than they have ever worked before means spending a fair amount of time at a laboratory bench.

So it’s just as well that Terry likes it there. Enough to retire once, travel the world and then unretire – back to Christie and back to collecting patents and industry plaudits. He says he enjoys the challenges and the company of the people he works with – and that it’s unthinkable he’d miss any chance to build the exciting new world lasers and artificial intelligence promises.

Fitted with his own invention?

Another of Terry’s patents attracting attention is an elegant piece of engineering design. It changed the face of conventional illumination. It’s an optical feedback loop based on IR filtering mirrors and it keeps lamp-based light sources bright over time. No matter how long they run the output is unfailingly constant.

Recently, we’ve begun to suspect that Terry Schmidt may have been fitted with his own invention. For, at the age of 71, Terry is still here with his ability to take great ideas and engineer them into existence entirely undimmed.

Long may that shine.