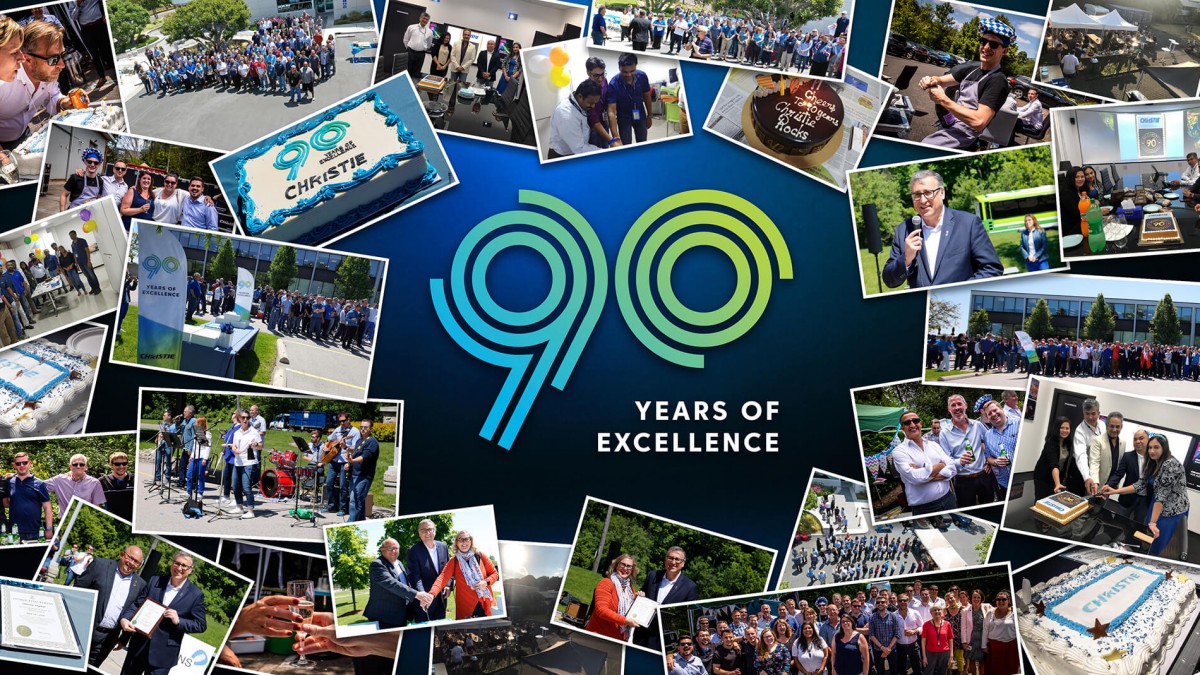 A global Airship network, says The LA Times, will link Los Angeles to the world. The first-ever talking picture is honored – at the first ever Oscars. Tintin is in the funny pages and new radio stations are broadcasting concerts into people’s homes. They’ve even put a receiver set in an automobile and called it a Motorola. This is 1929 and life is good.

Oh sure, type ‘1929’ into a search engine today and it’s all doom and gloom and the Wall Street crash. Okay, the stock exchange had danced a little shimmy, but that was nothing new. What was new in 1929, was a world of technical wonders as far-reaching and as full of promise as any you’ll see today.

Of all the places you could be in 1929, none was more exciting than California and the movie business. That year, the year S.L. Christie built his first projector, around 800 U.S. feature films were released, the Marx Brothers were on the screen and Mickey Mouse had spoken. Unfortunately, that little shimmy spun into a wobble that set the entire global economy awry and Christie Inc. – a child of optimism – had to grow up and grow up fast.

It did. This was when cinema was establishing itself as the people’s entertainment, when a handful of coins could buy you an entire afternoon of escapism. However, pictures that moved, actors that spoke and colors that shone all depended on projection – and Christie had a flair for that.

Carbon arc lamps were noisy, unreliable and tended to catch fire – Christie introduced xenon lamps. Film reels had to be changed mid-feature – Christie introduced platter systems so they didn’t. Christie also invented gearless and self-lubricating projectors – innovations that kept the drama on the screen and out of the projection booth. In that century, as in this, cinema and Christie were inseparable.

On the other side of the border

Meanwhile, north of the border, Christie’s future partner Dominion Electrohome Industries was treading a distinctly domestic path. A respected Canadian manufacturer of phonographs, they first expanded by pressing the records you played on their phonographs. Then they made radios, then furniture, then electric fans and by 1954, there was an Electrohome run TV station – and Electrohome TV sets to watch it on. Come the late 1960s, it was Canada’s first and only manufacturer of color sets.

Electrohome was the fireside entertainment to Christie’s Hollywood glamour. Maybe that’s why their coming together was so fruitful: not because they were similar, but because they weren’t yet sharing a single vision.

Christie, for example, had long believed that movies would someday go digital and Electrohome believed that digital TV should offer movie-like experiences. Until they joined forces, however, neither was entirely sure how.

Mind you, the idea that anything AV-related might go digital wasn’t an entirely fashionable or even believable view. For a start, the quality gap between film projection and video projection was a CinemaScope-wide gulf few thought could be bridged. Film had history, directors who knew how to use it and cinematographers who could make it sing. Early video projection had dim and muddy colors, fuzzy images, no production chain, and a well-deserved reputation for unreliability.

By the time the two companies joined forces as Christie Digital in 2000, they were convinced that Texas Instruments’ DLP® technology could change all that. Here was a technology that promised brighter colors, higher resolutions, and faster frames rates than anything film could manage. Given that Electrohome had the electronics manufacturing chops, and Christie the optics knowledge and the Hollywood savvy, it was soon clear they were onto something big – and not just in cinema.

Out of the auditorium

By the end of 2017, not only had 98 percent of the world’s cinema screens gone digital – but now that same technology had driven wider revolutions in the wider AV world.

We’re now quite comfortable with posters that move and projection mapping that turns outside spaces and theme-park rides into immersive spectaculars. We expect and accept projection as part of the shows we enjoy, the opening ceremonies we cheer and the sporting events we attend. LED technology is changing our urban landscapes, our places of work, and the way we interact with the brands we buy. Artists use AV to push at their own aesthetic boundaries with astonishing results. We educate our children using AV, train our surgeons to use it daily in their work.

You ain’t seen nothing yet

Pure RGB laser projection is already here, the worlds of IT and AV are continuing to converge, and artificial intelligence is changing the way content is created. We, literally, ain’t seen nothing yet.

It’s now ninety years since Christie made its first projector and nineteen since Christie and Electrohome became Christie Digital. Laws now prevent another 1929-like stock market crash – but the Airship to California still hasn’t arrived. Some dreams don’t come true but many do through hard work and perseverance – and it all starts with an idea. Yes, there are challenges to overcome.

Yes, there will be bumps along the road. But there will also be wonderful things to create if we care to look for them. The trick is never stop looking.