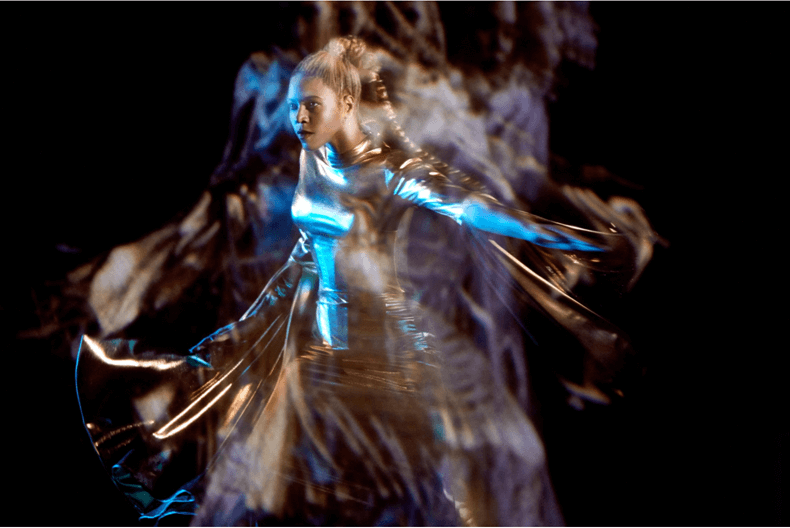 It used to be that if you’d ever seen the Eurovision Song Contest before – you’d seen it all before. You’d seen the false originality of shock-metal bands from Finland (292 points), singing grannies from Russia (55 points) and a disco Genghis Khan (Germany, 86 points)*.

We saw ethereal, holographic, almost 3D, interactive projections that made even experienced stage and lighting designers ask – how do they do that? How did that work? Where can I get it?***

Forget bearded lady balladeers, this was different, really different. This was Holo-Gauze, and its story begins in a far from glitzy front room in Stuart Warren-Hill’s flat in a never knowingly glitzy North London suburb.

Stuart Warren-Hill is many things: he’s an AV Producer, a Visual Artist, a VJ, an Electronic Musician – and he’s an Inventor. Which is just as well, because when he found no one could achieve the effect he wanted in his own VJ shows, he invented it. In his North London front room.

So what is Holo-Gauze?
Put very simply Holo-Gauze is theatrical gauze combined with a highly reflective (and highly secret) metallic coating. That means it will solidly reflect projected images, but it also means anything behind Holo-Gauze, when carefully lit, can also be seen.

Now, using stage gauze in this ‘now you see it now you don’t’ way is an established technique, but that coating was Stuart’s stoke of genius. With Holo-Gauze, projection and live action blend seamlessly and become part of the same performance.

And the effects it achieves belie its apparent simplicity – it was used to reincarnate Bowie for Lady Gaga’s tribute at the Grammys, it created multiple holographic choreographed Beyoncés that danced with the singer when she performed ‘Lemonade’ in Brooklyn, and, as that mesmerising Eurovision performance by Dami Im showed, it transfers perfectly into film and into TV.

The Christie Boxer 4K30 with its 30,000 lumens and 4K resolution is ideal in this role, as the smallest, smartest and most efficient 30K projector around it can project power just where it’s needed and really brings out the best in Holo-Gauze.

Stuart though longs for the moment when someone fires up a 60,000 lumen, RGB laser projector headed Christie CP42LH cinema projector in front of a Holo-Gauze screen. That, he says, is the day when reality really will warp.

The best is still to come
And while the effects Holo-Gauze produces already appear to have a 3D dimensional element, using true stereoscopic projection with active 3D glasses will take into another realm entirely, indeed Stuart feels that the real potential of his invention is yet to be realised and that the interaction between performer, projection and audience it promises has only just begun. Almost off-handedly he mentions plans for performers guiding mapped projection with Wii controllers, of motion tracking and of huge screens in outdoor arenas.

In fact when asked how he’d really like to see his invention used he goes quiet for a moment, perhaps wondering if he’s being too ambitious. “I’d fill Wembley Stadium’s Arch with a giant Holo-Gauze screen, project 3D from the most powerful RGB projector I can find and give North London the biggest light show it’s ever seen.”

No, we don’t think you’re being too ambitious Stuart – like you, we think the adventure has only just begun.

* Eurovision’s points system is as inexplicable as its popularity – all these acts won.